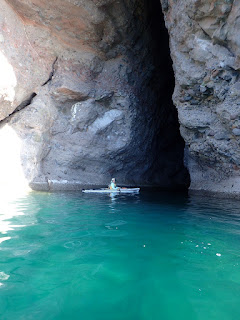 Our plan for each day was to get on the water early, paddle a couple of hours, quick snack, then paddle til about noon, tarp up to shelter from the sun, then paddle again about 4pm for an hour.
The wind was due to pick up later, but off we set, on the water again for 7.15, quite impressed with myself managing these early mornings!
A big boat had arrived in the bay to drop kayakers off. They have a little pootle round the bay, then they are back on board to the next bay, not really my idea of fun! however the boat did have a good name - Sarah Endeavour!
We had only just got out of the bay when we saw our first sealion. It didn't hang around. A little bit further on, we saw our first turtle, then our second, then third! They were popping up all over.
We eventually managed to land for lunch, our first beach we had hoped to stop on had commercial camping set up on it. Huge tents are set up complete with table and chairs, folks arrive by boat, given drinks, given food, everything done for them - again that's not my idea of fun either - well maybe being given a wee tequila as soon as you land could be good! A lot of the other beaches were rough and very surfy. We couldn't get the tarp up this day due to the blustery winds, so ended up sheltering under some dodgy looking rocks! The good thing about Mexico is that the solar charger gets fully charged in next to no time. No problem with the cameras or GPS batteries. No problem keeping the radio battery charged either, just that no one listens out for the radios here. 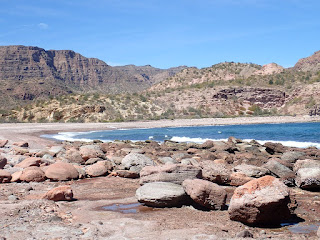 Back on the water fairly quickly today, not too happy under these rocks and when you're in the shade, believe it or not, it can be quite cool! After 32Km, we eventually made it to yet another wonderful beach, Punta Botella. We both had a refreshing wee swim, then went for a (very) short walk up by the cactus plants before heading back, having dinner, then watching millions of stars - so much better than telly! 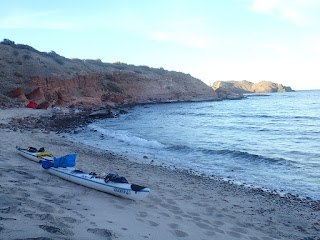 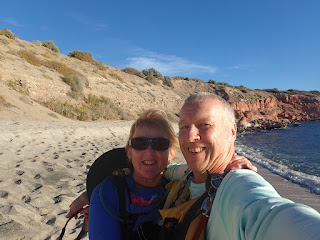 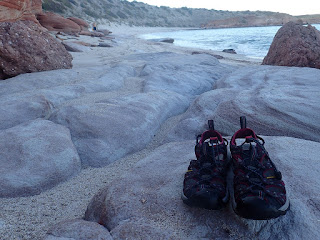 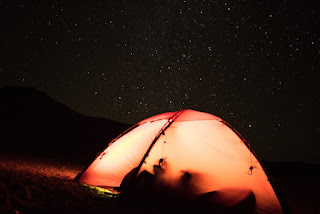 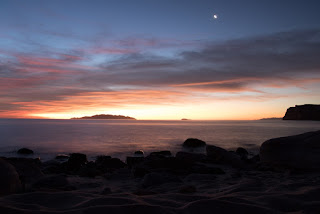 Next morning, still up early, we had the feeling we were being watched while having our breakfast, sure enough we were, by an osprey from behind and our first turtle of the day just in front of us. Once launched, it wasn't long before we saw more turtles and dolphins. Then we spotted the first of our flying rays, landing with huge splooshes. A bit further along, we stopped to watch a huge pod of dolphins having a real feeding frenzy, with pelicans and guls all joining in and not in the least bit worried about us. We sat watching them for quite a while, however, as we still hadn't paddled very far that morning,we left them to finish devouring what was left of the fish. 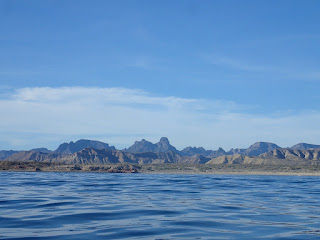 The water was lovely and flat, with just a gentle swell, we were out in the middle of nowhere, what had been a really peaceful paddle was now being interrupted by a strange noise. We couldn't see anything, no boats, no planes. It sounded like crashing waves, but it was beautiful conditions. After a bit, still trying to figure out what was creating this noise, we spotted a "hullabaloo" a good distance off in the water. It was travelling at quite some speed - straight for us! It was dolphins. We thought there were a lot of dolphins in the feeding frenzy, but that was nothing compared with what was racing at a terrific speed - still straight for us - yikes! We thought about paddling forward, but the speed they were going this would have been a waste of time. We rafted up, banged our paddles on the boat a bit to let them know we were there, just at that point, there was the smallest change in direction, not in speed, and they charged past right in front of us. The pod was about 25 - 30 deep, and possibly about 1km long, hundreds upon hundreds of them, absolutely breath taking. The noise  they made and energy they gave off was unbelievable. After they passed, the waters calmed down again, just like they hadn't been there. 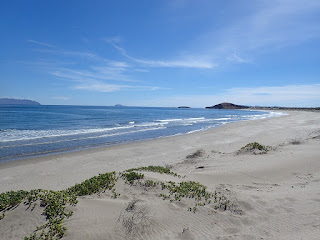 Just as well we were only paddling 22km today, all this stopping and watching. We found yet another beautiful beach at Punta Blanca where we went snorkelling with loads of fishes and octopus.
Our evening entertainment was another spectacular light show. This time the water looked like it was splashing electric blue. Quite magical!


Day 5
Again we watched dolphins while having our breakfast. We set off for our long crossing over to Isla San Jose. We could see it quite clearly making it look a lot closer, but with the wind against us, believe me, it wasn't close!
We were accompanied alot of the time by flying fish, they certainly can travel quite some distance. Away far off into the distance, we saw a large "something" breach, don't know what it was. We eventually made it over to the island, back in shallow waters we could watch shoals of Sergeant Majors and spotted our first King Angelfish. We were being followed by a pod of 6 small dolphins down the side of the island. There were lots of rocky, quite exposed beaches, but we did eventually find a lovely one. Although it was an island we were on, we didn't feel quite so isolated, there was a boat anchored further round in the bay and we had passed a few little make shift fishing shacks. I have to say, I quite liked the isolated feeling. Although we had already paddled 30km, we were having a short day. We put the tarp up and had a lazy afternoon, the morning paddle had been hard enough! There were clouds tonight, so no stars and no sunset! 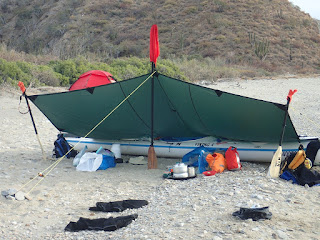 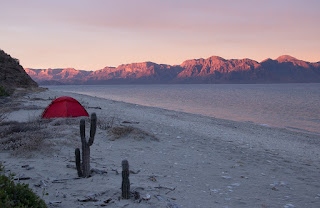 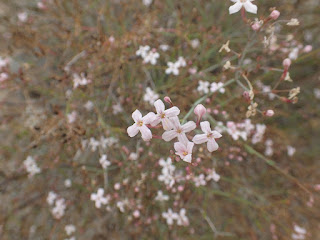 We had a long lie today - bliss! No dolphins or turtles to watch while having breakfast. We went for a look at a dry river bed. There are lots of little birds, some very colourful. The whole area must be beautiful in about a months time with all the flowers about to bloom. We didn't want to go far as we hadn't taken water with us, not intending being out long. We came back down to find 2 vultures eyeing us up from the tops of 2 large cacti. After our coffee, we went in for another snorkel with pipe fish, blue tangs, more King angels and lots more Sergeant Majors. 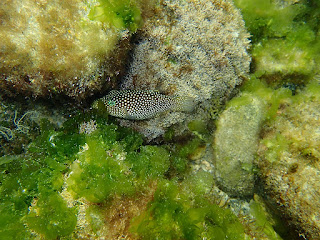 Time to paddle again a bit sooner than we had hoped, but the weather was changing. Another VERY blowy crossing over to San Evaristo. There could have been whale breaching, sharks circling, dolphins backflipping, I was having to concentrate on the conditions. We could only get long range forecasts before we left  La Paz and they had been fairly accurate. We knew the wind was due to change, it just did it a bit earlier. We pulled into San Evaristo, a little fishing village where we were told there was a "shop". We spoke to some fishermen, who were busy unloading their catch. We had hoped for just a wee bit fresh fish, but some of the fish were huge, however they did gut and fillet a couple of pieces of snappers for us.

We then went off in search of the shop, following the fishermen's instructions,(Spanish phrase book out again!)however we ended up at a pink church! We did find the shop, it was a wooden shed, added onto the house. There were no lights - and no ice cream! They did have lots of orange juice and toilet rolls. We did get some apples and a couple of very ripe bananas, the tastiest bananas ever. They were the only folks we spoke to, other than each other, until we landed back at LaPaz!
Back in the boats, we headed onto Accerife Coyote beach. A very hard 23Km today.